The life of Dr. Amporn Revealed.

From beggar as a child to director of a children’s foundation. World class organization.

We can’t choose what kind of life we will be born into. Everyone wants to have a good life, full of love and care from their parents, relatives, and everyone surrounding them. But in reality, it doesn’t always happen. It’s really sad for a kid to be born poor and underprivileged in a rural area. The first thing children want when they open their eyes to the new world is love and a warm hug from their mother. Unfortunately, poverty is cruel. It can affect the health and hygiene of a mother and her child. Some might become malnourished or handicapped. Despite it all, there are some people who have a good heart and have the mercy to help relieve their problems. Many government agencies and private sectors are founded to help underprivileged people. Our special scope will present you the story of the director of the Foundation for Rehabilitation & Development of Children and Family. He has grown up lonely because both of his parents died when he was very little. He was born into a poor family, and he needed to become a beggar since he was homeless. He struggled through a lot of challenges in order to become successful, and now, he dedicates himself to work for the underprivileged. He is Dr. Amporn Wathanawongs who is known as “the father who gives a new path of life to poor kids.” Our team would like to present you how his life is very interesting from past to present. He told our team that:

“Surin province is my birthplace, but I don’t know exactly where my family was from since my parents moved from a different place and built a cottage in Surin. I was born on the 11th of March in 1937. My parents passed away when I was five. I didn’t have any relatives or siblings. I was a single child. When my parents passed away, I had to wander here and there in order to survive on my own. I went through many tough situations, and I had no home. I had to constantly change places to live. No one took care of me. I received no education. I sold my labor in exchange for small amount of food. Most of the time, no one would hire me because I was homeless. Several times, I had to secretly eat the leftover food that people left on the table from the street food stalls. I slept in those stalls in the market, on train station platforms, in coaches, and in paper boxes the way dogs and cats do. They would be my friends and warm me up when I was lonely. They were my pillows. At a young age, I had to sleep in between building blocks and rubbish sites. It was not a pleasant or admirable life. I didn’t have a doctor norteacher to educate me or take care of my health. I was so thin because I was malnourished. I was very unhealthy and weak. When I was sick, I could only let time heal me. It was very painful when I had wounds caused by fungi, like scabies.

When I got older and became a teenager, my life was only full of loneliness, and it was meaningless and hopeless. I had the thought of taking my own life because I couldn’t tolerate my bad luck. I remembered attempting suicide twice. The first time, I tried to hang myself but someone saw and saved me in time. The second time, I consumed insecticides, and again, I was saved by some villagers. They put me in the hospital again, and I stayed there for quite a few days. I began to think more positively after my two suicidal attempts.

But, I survived. From that moment on, after I was released from the hospital, I had a different thought than suicide to escape poverty and all the cruelties that happened in my life. When I turned 18, I was given a chance to ordain as a novice monk. I studied Buddhism and passed the dhamma scholar advanced level. I passed the equivalent exams for Mathayom 9, 12, and 14 respectively. Simply put, theBuddhist temple gave me the opportunity to access education. Another thing I found myself lucky to have is my excellent memory. When I studied, I could remember every detail within two times of reading it. I could thoroughly complete an exam. I quit being a monk to start working, and that was full of obstacles. I started my first job as a golf ball picker at Sra Prathum horse race course. After that, I did some gardening and cleaning in houses in exchange for money. I was also a mason and mechanic. People also hired me for cleaning the canal and growing grass on the street dividers.

Once, when I was working, I had a high fever. But I didn’t have money to go to a doctor. So, I covered myself in ash to warm myself up. I relied on herbal medication, such as neem leaf. I chewed it and drank a lot of water to relieve the symptoms. Until one day, I met with a Christian priest. He was a Catholic priest from Xavier Church in the Victory Monument area. He found me to be very enthusiastic, so he wanted to hire me as a librarian. I did everything including following kids who were from poor families to studying. I arranged books in the library, guarded the house, took care of the house, cleaned the toilet, gardened, and helped young orphans take a bath. From this point on, I learned to sacrificemyself for society and help society in every area. Eventually, Angel Center, or Xavier Church, decided to send me to study in the Philippines for two years with a scholarship from Germany at Xavier Universityin Cagayan de Oro. I studied about leader development and community and rural area development in Asia. I received a Social Work diploma from Xavier University in 1966 and returned to work as a socialworker at Angel Center from 1967 to 1968. I also worked as a manager for a pharmaceutical company at the same time. Thereafter, I became a manager’s assistant for a goods store on the American military base in U-tapao airport during the Vietnam War. I was transferred and became a senior human relations officer of the American military base in Thailand at the Bangkok headquarters. When the war ended, I started my new job in 1974 at C.C.F. Thailand under the Her Royal Highness Princess Maha Chakri Sirindhron’s patronage. C.C.F. international has headquarters in Richmond, Virginia in the U.S. that took care of providing aid for poor children and families. In 1975, I received an opportunity to continue my studies in MBA in the faculty of commerce and accounting at Chalalongkorn University. I worked with C.C.F. Thailand until I was promoted to a director in 1987, then I finally retired in 1997.

Now that we roughly know about his profile as a fighter and his working experience, let’s find out more about how the life of Dr. Amporn is today. Here is his answer:

“If you ask me whether I’m currently happy or not, I’d rather say no because there are many poor people out there who need my help. Although I have retired from C.C.F., I still continue my own foundation that is used as a tool to connect poor children and average people who have the ability to support the underprivileged together. The foundation is named Foundation for Rehabilitation & Development of Children and Family. FORDEC was opened on the 14th of February, 1998, using Valentine’s Day with the intent to share love from wealthier people to those who are poor and underprivileged with the motto “To the sufferers from loving hearts.” I spent my own money to create this foundation. I also had the help of my former colleagues as well as other volunteers and donors toestablish this foundation. The foundation is a charity organization that also runs public projects that help children, the elderly, poor families, and handicapped people. The office is located on the ground floor of Baan Fun Condominium. The address is: 1035/3 Srinakarin Road, Sub-district/district Suan Luang, Bangkok, 10250. Or P.O. Box 33 On Nut, Bangkok, 10250. Call us at (662)721-2983-4 or fax to (662)721-2985.

I have always had this goal in mind because I was once an orphan and have been poor growing up, and I have the ability to help others in the same shoes as I was. I will do this with my best efforts because I understand how suffering and hunger feels. I want to say that if you have a chance, even if it’s only onebaht, you can relieve the poor kids out there who are suffering.”

So, Dr. Amporn Wattanawon can be considered a role model and a social worker who has dedicated himself to lessen public distress. It’s such a huge burden, but with his personal experience as a poor orphan, he became a founder and director of FORDEC. With his heart and soul, he truly understands the feelings of these young children who are in the same unfortunate situation as he was. As media, we’d like to invite those of you with kind hearts to donate and help relieve the distress within society through Dr. Amporn at FORDEC’s address: 1035/3 Srinakarin Road, Sub-district/district Suan Luang, Bangkok, 10250 or P.O. Box 33 On Nut, Bangkok, 10250. Call us at (662)721-2983-4 or Fax to (662)721-2985. Please, let’s help them. One baht from your pocket equals a good day for these poor children. 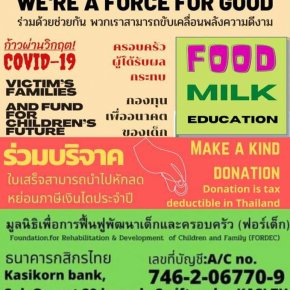 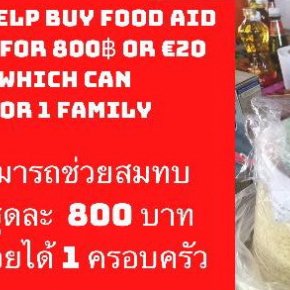 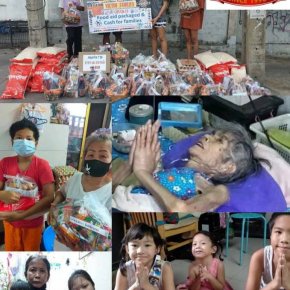